FOR THE PRESS DEMOCRAT

In today’s fast-paced world, standing next to a living being that’s more than a thousand years old can be unexpectedly quieting.

Luckily for us in Sonoma County, that experience is within fairly easy reach.

Several native tree species here, like the black oak and Douglas fir, can live for five, even 10 human lifespans. But by far the eldest trees are sequoia sempervirens, the coast redwoods.

In a few local spots, some trees have managed to survive nearly 2,000 years, despite millenia of flood and fire and more than a century of axe and chainsaw.

Several of the leviathans are easily accessible by car or a moderate hike. Here are the stories of four of the oldest redwoods in Sonoma County and their locations. Ask them about aging well, standing tall or the very nature of time. And maybe take away a reminder that a slow pace has its own rewards.

Estimated age: 1,400 years old The gigantic Armstrong tree is actually named for the man who spared its life.

Colonel James Armstrong managed to survive the carnage of the Civil War — he volunteered to fight, twice — before striking out for the Pacific coast where he replanted his family in the lush forested landscape of present-day Sonoma County. Starting in 1874, the veteran threw himself into a succession of frontier opportunities, including a lumber mill.

Armstrong was among many who discovered, as the Gold Rush waned and California grew, another valuable resource for the taking: the virgin trees growing tall and thick among the coastal ridges and canyons. The resulting

The reason the tree bearing Armstrong’s name is still standing in a canyon near Guerneville is due to the colonel’s wide-eyed awe of the redwoods, completely out of step with his times.

He deliberately kept his steel saws out of one remote, shaded canyon of his land, now the Armstrong Redwoods State Natural Reserve, to spare a stand of particularly magnificent redwoods. Unlike the surrounding forest — Guerneville was originally called “Stumptown” because that’s all that remained on the hillsides and canyons — Armstrong decided to preserve the grove as a botanic park for future generations.

It almost didn’t happen. But thanks to one dedicated heir, members of the LeBaron family (friends of the Armstrong family who had bought part of the land) and decades of public support and agitation, the ancient grove is still standing.

The Armstrong tree is located a half mile from the park entrance, along an easy, level trail. As a bonus, stop by the Parsons tree, nearly as old as the Armstrong tree, but the undisputed tallest redwood in the park at 310 feet.

Unlike the towering, stately Armstrong tree, the Grandmother tree is shaped like a multi-armed candelabra. That may be why it’s still alive.

On reason redwood lumber is highly valued is because the trees grow tall and straight, making them easier to fell, haul and mill than other trees.

The east side of Sonoma Mountain, where the Grandmother tree stands, was once thickly forested with redwoods.

According to local author, historian and ecologist Richard Dawson, the Grandmother tree likely was spared by homesteader William Thompson, who had settled on the land, simply because it wasn’t worth cutting down. The arching, many- branched Grandmother may have taken on its unusual shape after a lightning strike or fire severely damaged its main trunk, encouraging side growths.

By the time Jack London acquired the property in 1905, the land had been worked hard and most of the forest had been cut.

The author and his wife labored for years to create an advanced and sustainable agricultural project, their Beauty Ranch, much of which is now protected as Jack London State Park where the Grandmother tree resides.

The Grandmother is accessible from the Vineyard trail, a moderate 2-mile hike from the main parking area.

McApin tree, Harold Richardson Redwoods Reserve Estimated age: 1,640 years old The tree’s location, on property about 40 miles west of Geyserville, is not open to the public — yet. But the Save the Redwoods League said in 2018 it plans to open the reserve as a park in a few years.

Far up Haupt Creek, a tributary of the Gualala River, sits a grove of ancient redwoods which until recently was privately held and relatively secret.

When landowner Harold Richardson died in 2016 at age 96, his heirs made arrangements with the Save the Redwoods League, which bought the old-growth forest of more than 1,400 trees in 2018 to protect and open the place as a reserve.

The McApin tree, the mammoth elder of the reserve, is the oldest living redwood in Sonoma County confidently dated by scientists. Its top soars 293 feet above a buttress base as wide as a two-lane street.

According to Allyson Carroll, redwoods researcher at Humboldt State University who helped date it, the McApin is not the tallest tree in the grove, but it is the oldest. Carroll individually counted more than 1,500 rings of the giant using a new method developed by Stephen Stillet, a professor at Humboldt State and a National Geographic Explorer.

Stillet and his team climbed with ropes high into the redwood canopy to collect cores at intervals along the tree’s trunk. Back in the lab, Carroll lined up the cores, counted, compared and cross-dated them to account for any “missing” rings.

When the Harold Richardson reserve opens, it’s likely to be on a lot of redwood bucket lists.

The Queen of the Forest, Petrified Forest near Calistoga Estimated age: 1,800 years old The Queen is not just an ancient redwood, she’s also extremely old.

She was first spotted in 1870, on a fire-swept slope near Calistoga. Renowned dinosaur bone hunter Othneil Charles Marsh was scouting the newly- cleared soil when he spied a log half buried in the ground.

What made the log interesting was that it was stone. Upslope, he found more stone trunks — petrified trees — some stretching 60 feet long and 12 feet across. Back at Yale University, Marsh identified them. They were all redwoods.

Petrification is a process that happens over a vast span of time. Wood cells are completely replaced by minerals, leaving a perfect rock replica of bark, heartwood and branches.

The petrified redwoods are still there, frozen in their grove, in the Petrified Forest near Calistoga, which is open to the public.

It’s estimated that when the Queen fell, she was already at least 1,800 years old. The volcanic ash that buried and preserved her came from Mount Saint Helena when the volcano erupted 4 million years ago.

The Queen’s particular species of redwood is different than our modern sequoia siempervirens.

At one time, scientists have learned, there were as many as 12 different redwood species worldwide. Their fossils have been found around the globe, evidence of the vast redwood forests that once grew.

According to the Redwood League, only 5% of the original 2.2 million acres remain of the tall trees that existed in California before the Gold Rush.

The redwoods still living in Sonoma County are true survivors, the hardy and lucky few, of a truly ancient lineage. 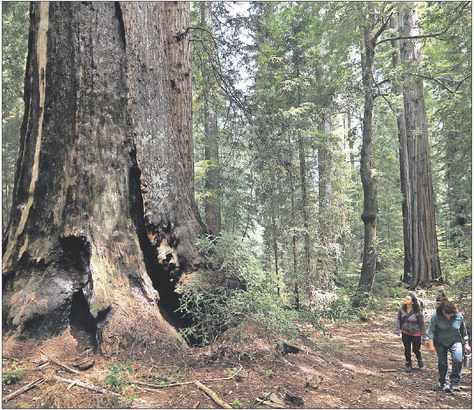