‘Queen of the Hippies’ was a west county social icon

Recalling the year 1969, the Ohio native once wrote that she split from the hippie scene in the Haight and Fillmore districts “when people on tour buses started pointing at us and our community was overflowing with homeless kids suffering in the streets.”

She died Sunday at her country home in Freestone. She was 78.

“She was kind to everyone and a leader. And she helped people out,” Carpenter said. “Some even called her the Queen of the Hippies.” 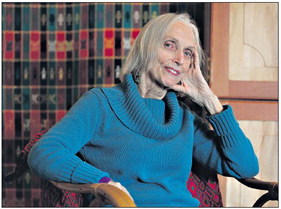 “She was a real Sonoma County icon,” said Selwyn, who collaborated with Rasberry on the 1995 book “Living Your Life Out Loud: How to Unlock Your Creativity and Unleash Your Joy.”

Rasberry “definitely lived her life out loud. She walked the talk,” Selwyn said.

Rasberry’s husband of 30 years, Michael Eschenbach, said that shortly before she passed at their home she told him, “After I die, I want you to leave me alone for 24 hours. It takes a soul a while to depart.”

He did as Rasberry asked, keeping her body at home throughout the day Monday.

The former Salli Harrison was born in Cincinnati, Ohio, on Sept. 21, 1940. Her parents moved with her and her brother and sister to Florida, but returned to Ohio when a hurricane destroyed their house in Tampa.

Not long after graduating from high school in Cincinnati, the future Salli Rasberry met musician David Freiberg. He would co-found the psychedelic rock band Quicksilver Messenger Service and go on to play with Jefferson Airplane and Jefferson Starship.

In the written recollections from her life, Rasberry told of how, in 1959, Freiberg asked her to go with him to San Francisco.

Her future husband “promised I would love the hills,” Rasberry wrote. “I did.”

She also recalled, “We lived, like many others of our tribe, in flats that lent themselves to people living together in community with room for friends. The rents were affordable. The Haight was close to Golden Gate Park where we gathered and enjoyed music, nature and each other.”

She and Freiberg split up.

A subsequent relationship brought Rasberry a daughter, Sasha. The child’s mother searched in San Francisco for a preschool with values in line with her own, and she found and became active in The Hearth, operated in the basement of a Methodist church in the Mission District.

Rasberry recalled in her writings that school “reflected the values of the counterculture children of musicians, visual artists, writers, poets, and performance artists.” Rasberry left San Francisco with her daughter in 1969 and came to Sonoma County. She wrote that she “lived off the grid in a tepee and then a small, funky cabin for eight years” in a Bodega commune created by friend Delia Moon.

When Wheeler and his wife, Gay, welcomed a daughter into the world and named her Raspberry Sundown Hummingbird, that act inspired the former Salli Harrison to change her surname to Rasberry. She answered often to “Raz.”

Eager to learn and to create, Rasberry as a young woman co-founded an alternative school and published, with Robert Greenway, a Sonoma State University professor, “Rasberry Exercises: How to Start Your Own School and Make a Book.” Subsequent books focused on how to return to the land and operate one’s own business.

Rasberry lived for a years on a Coleman Valley sheep ranch, mastering the art of harvesting, dying, spinning and creating beautiful items from wool.

With Moon, she created an artist support group they named Common Ground.

A lifelong environmentalist and preservationist, Rasberry served on the original board of the Farallones Institute, precursor to the Occidental Arts & Ecology Center.

She also served on the Sonoma Land Trust board, for a time as president.

Friend Robert Brent, who has served 26 years on the Land Trust board, recalls constantly being surprised by Rasberry. When she became the board president, he said, it occurred to him that she’d be distinguished mostly by her sweet and positive nature.

Said Brent, “Your first impression was, ‘My, she’s so nice.’ You didn’t realize she was also capable. And she was so capable.”

Rasberry and Michael Eschenbach, a building contractor, married on April 24, 1989. They’d met at a party in Occidental, and Eschenbach noticed that Rasberry was singing “The Rose” and struggling to remember the words.

“I knew the words so I walked over and we started singing together,” he said.

The two of them lived and worked for a time in rural Guatemala.

In recent months Rasberry’s health declined from ailments that included a post-surgical infection.

The last visitors to see her were her grandchildren, Miles Dylan Marshall of Occidental and McKinley Johnson of Monte Rio. Afterward, Eschenbach said, “She just put on her wings and she shuddered a couple of times and took flight.”

In addition to her husband and grandchildren, Rasberry is survived by her daughter, Sasha Marshall, of San Francisco.